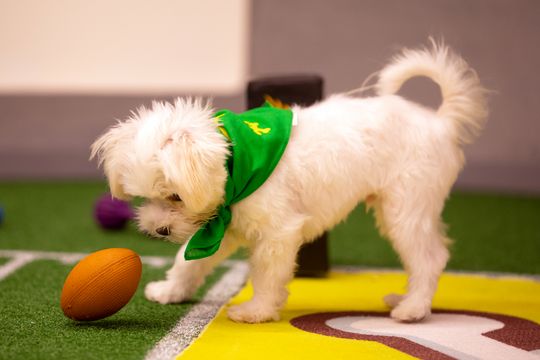 Over The Past 14 Years PUPPY BOWL Has Featured More Than 500 Adoptable and Adorable Puppies That Have Played Their Hearts Out And Found Their Forever Homes. Back By Popular Demand, PUPPY BOWL PRESENTS: THE DOG BOWL Returns Sat. Feb. 2 at 8PM

Ready, Set, Pup! Television’s fuzziest sports competition and original adoption extravaganza is back and celebrating its 15th year, the biggest to date, as the world’s cutest sporting event returns to Animal Planet for PUPPY BOWL XV on Sunday, February 3 at 3PM ET/12PM PT.

This year, Animal Planet worked with over 50 dedicated animal shelters and rescue organizations from over 20 states and territories in the U.S. and made an international stop to Costa Rica, to get these puppies set for the big game. With a bigger game in store for viewers, audiences will be sure to find their favorite elements returning to the fluffiest game of the year including a front row seat to the pre-game rituals of these special pups via the locker room camera.

Accompanying Dan on the sideline is his trusty rufferee assistant, Shirley, the rescue sloth who is keen to show off the slow-motion action throughout the game. We’ll also meet Shirley’s biggest & enthusiastic fan club – a group of loveable baby sloths from Costa Rica’s Toucan Rescue Ranch sanctuary. Viewers will additionally meet each of the team’s designated mascots – TEAM RUFF will be energized by an adorable trio of baby porcupines, while TEAM FLUFF has a charming capybara on their side for moral support. And don’t forget to check out the spectacular group of baby kangaroo cheerleaders who root for their favorite team from the sidelines! PUPPY BOWL XV will also feature three fuzzball special needs players that are looking forward to finding their forever home; including Pippi, a blind Jack Russel Mix; Bumble, a blind and hearing-impaired Australian Shepherd Mix; and Will, a three-legged Doodle Mix.