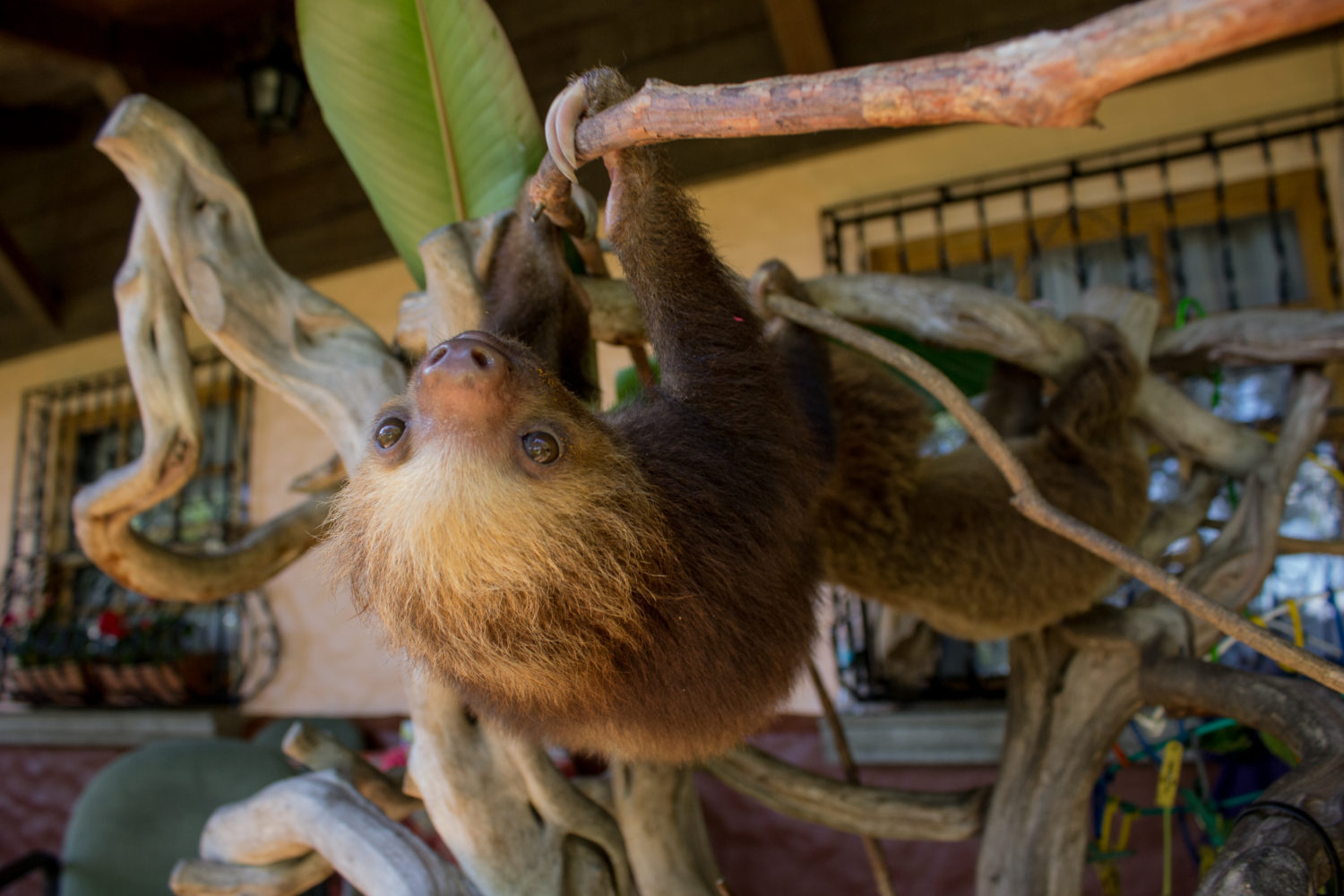 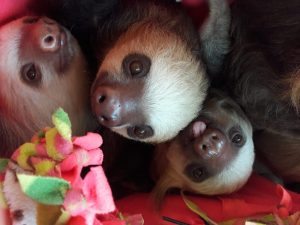 Some of the high school kids Mitch looked after snuggling.

I wasn’t 100% sure what I was getting into when I accepted my internship at the Toucan Rescue Ranch in 2016. Quite frankly, I don’t think the people who hired me were 100% sure either. My position was still fairly new and I’d be joined by a Mexican vet intern, which was a first for the program. For six months, I took on the somewhat self-proclaimed role of “Sloth Dad.” 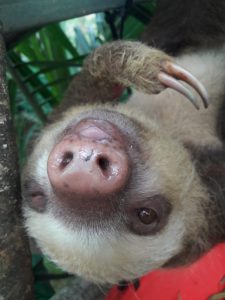 Chispa, one of Mitch’s first sloth daughters. She is now in college at the Release Site.

We had over thirty sloths, two-toed and three-toed, resident and orphaned, under our care. I took baby sloths to the toilet and syringe-fed them milk. I exercised recuperating adult sloths on an almond tree in the front of the property, many of which were injured from dog attacks or were amputees from power line accidents. I worked long hours and occasionally did night observations on our hand-raised sloths in their pre-release enclosures during the earliest hours of the morning (two-toed sloths are nocturnal after all). It was pretty intensive to say the least, and I was always busy, which is why it was no surprise that my six-month stay flew by so quickly.

I returned home to the U.S. and, much like any other wayward 20-something, wasn’t really sure what to do next. I managed to land a seasonal position at my aquarium, but once that ended I was back at my old restaurant job. After a period of fruitless job hunting, TRR called me back, but not exactly in a spiritual sense. Rather, they were understaffed and needed help. Without anywhere else to go, I set off once again for Costa Rica to reprise my role as “Sloth Dad.” 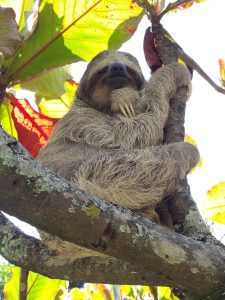 A common job for Mitch was to make sure sloths received daily exercise. As you can see this sloth is working hard.

My responsibilities were somewhat different this time around. I wanted to learn more in the clinic and soon found myself giving injections, preparing subcutaneous fluids, assisting during surgeries, rushing into animal emergencies, and waking up at 2 a.m. to feed milk to needy baby animals (which was anything from a tiny baby squirrel to a squirmy peccary piglet). I had originally anticipated to only stay for three months this time around. That definitely didn’t happen. I stuck around for another seven-months until I was finally offered a full-time position at another wildlife rehab center and animal sanctuary in the exotic land of Texas. Thus, my second extended stay at the Toucan Rescue Ranch had come to an abrupt end, and having lived and worked with now close friends and beloved critters for over a year, it was a bittersweet farewell.

The skills that I’ve gained from my experiences at TRR have been immeasurably helpful for a career in wildlife rehabilitation. I’ll admit that rehab wasn’t my first choice, but nursing an animal back to health and releasing it into the wild was personally fulfilling for me and, as corny as it may sound, gave me purpose (which, I guess, is what I’ve really been looking for this whole time).

My new job in Texas has its similarities and differences with my internship at TRR, but on a much bigger and even busier scale. The variety of animals I work with is immense, ranging from local songbirds to exotic monkeys that were previously kept as illegal pets. While I feel somewhat prepared, there is always that feeling of uncertainty stepping into a new job. Yet that’s exactly how I felt two years ago when I stepped into a home-grown rehab center in Costa Rica. I only just started here, and I don’t know what the next step will be, but for now that’s okay. There’s still a lot for me to learn, and from this point on I can only keep moving forward. Now if you’ll excuse me, I have some baby birds to feed. 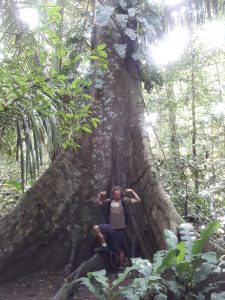 Mitch is a graduate of Oregon State University with a degree in Zoology. He has past experience working with cheetahs in Namibia, whales in British Columbia, and condors in Southern California. Mitch was also the author of many Sloth Journals which became a hit on our blog. (He is also fairly tall and hits his head a lot.) 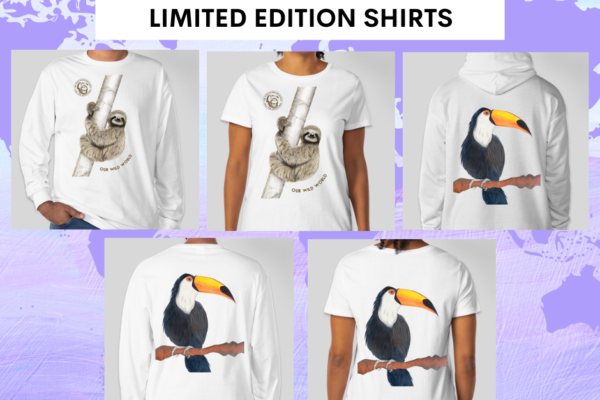 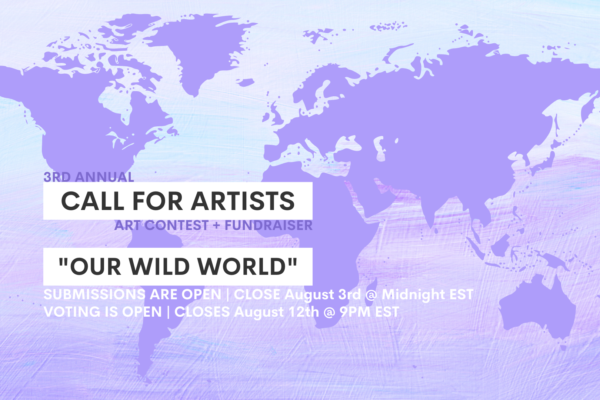 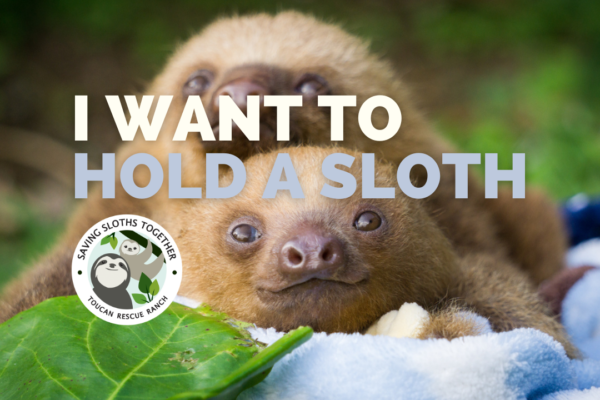