Behind the Cage: Illegal bird trade in Costa Rica

Posted on April 30, 2021 Categories: Education, Missions, Wildlife No comments yet 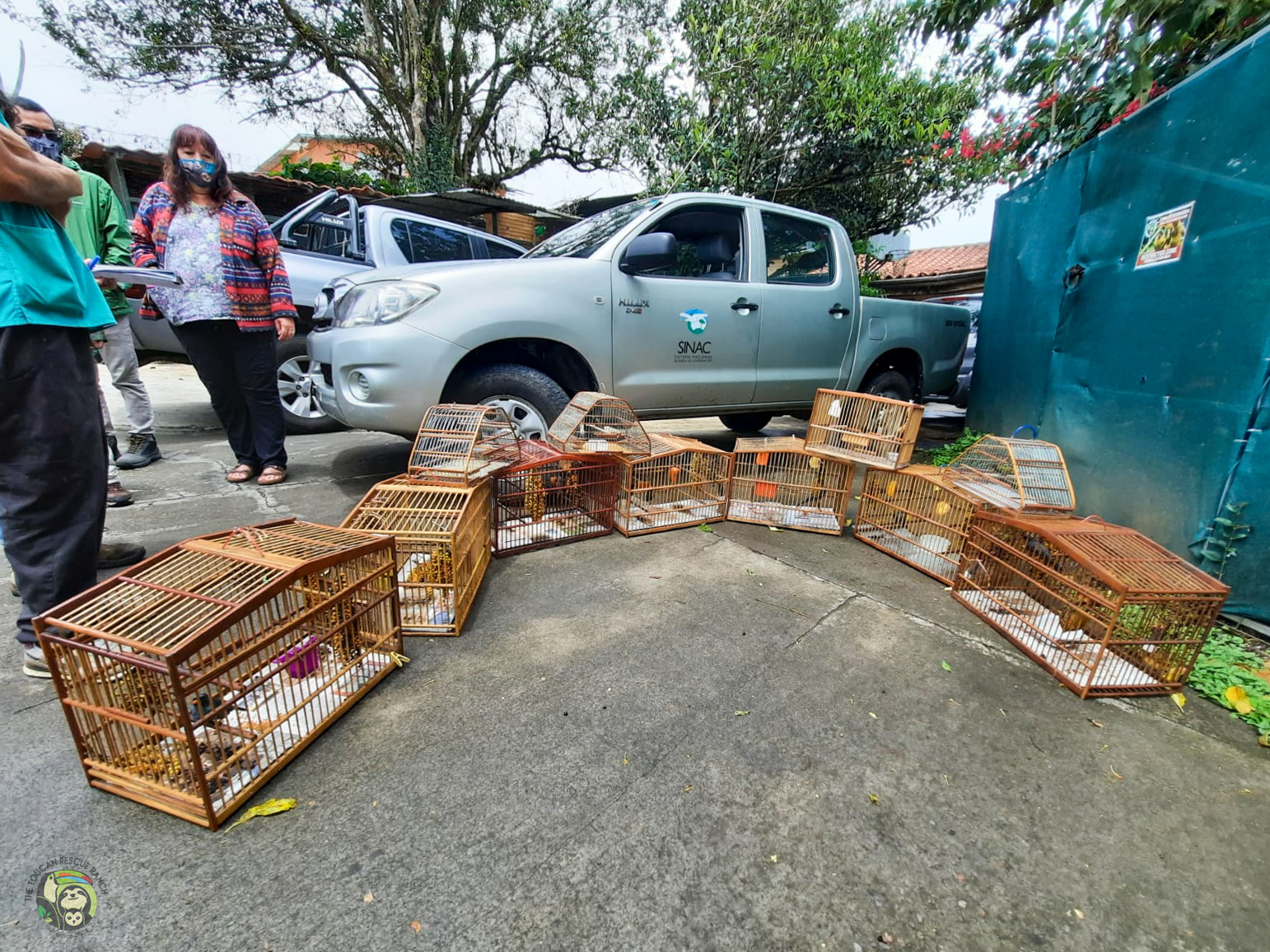 Growing up in Costa Rica, it was very common to know of someone who had a pet bird. Maybe a small songbird, but sometimes even a macaw or a parrot. It was so common you could argue these species didn’t even feel exotic. But that was then, right? People don’t still do that, right? They know this is illegal, right?

Just in a week in 2021, we received over 28 birds from SINAC/MINAE, the wildlife police of Costa Rica. Between multiple trucks and arrivals, we quickly had our hands full with once illegal pets that needed to be evaluated and released, or be kept in our sanctuary if they couldn’t be rewilded.

This may come as a surprise to you, since Costa Rica is known for its eco-friendliness, green initiatives, and beautiful national parks, striving to keep this country like the biodiversity queen she is. Nonetheless, the illegal pet trade is one of the biggest threats the country’s wildlife faces. And most of these practices come from ignorance.

So, why can’t exotic animals be pets in Costa Rica?

Since 2012, the trade in wild pets, both wild-caught, and captive-bred wild animals is prohibited in Costa Rica and has been banned ever since. Nonetheless, as we mentioned, this is a practice that has been ingrained in Costa Rican culture for decades. And it’s been hard work to reverse, which is why we are highlighting it today.

Not only are many of these animals endangered or threatened, but individually it causes them incredible amounts of stress. These animals suffer when they are in the wrong environment, eating the wrong food, in small cages, even being touched by humans. None of these things are natural to them, and you shouldn’t expect them to behave like a dog or a cat.

What are the consequences of keeping these animals as pets?

Long story short, a life in captivity. As a licensed wildlife sanctuary, Toucan Rescue Ranch works with MINAE/SINAC when it comes to these cases. Since they haven’t had the right space to behave naturally, been oversocialized with humans, and probably didn’t have the right diet, these animals can’t return to the wild. Sadly, almost all the wildlife at Toucan Rescue Ranch sanctuary used to be pets – we are talking around 200 animals.

So, when faced with dozens of animals that cannot return to the wild – what do you do? A wildlife sanctuary is the next best thing we can provide for them. This way, they are provided with a safe environment overseen by professionals where their lives will be full of enrichment, the right medical care, diet, and socialization.

Still, these animals shouldn’t have to be in captivity to begin with. But this is an issue that can start from something as small as a neighbor finding a bird and deciding to keep it – to the black market trade.

What is the black market trade?

Millions of animals are taken from their habitats to live in homes as pets, feeding a thriving illegal trade in wildlife. According to National Geographic, each year millions of exotic animals (meaning anything unusual from the standard pets) are sold around the world, destined for people’s basements and backyards. This translates into something between $7 billion and $23 billion a year, making it one of the most profitable criminal enterprises.

After an animal is plucked from the wild illegally, it might be used in either a breeding operation, sold locally, smuggled out of the country, or intentionally mislabeled as captive-bred and exported legally.

So what can you do?

Sadly, the most effective way to stop wildlife trafficking is by noting the dangers it can bring to humans. Maybe these animals are out of their habitats, but they are still wild animals. They are unpredictable and can hurt you, escape from their cages, and put your whole community at risk.

Additionally, if you know of someone who has an exotic animal, whether that’s a bird or something bigger, you can always call MINAE/SINAC, the wildlife police, and let them know. And if you are not in Costa Rica, call the police or your government’s animal police. Even though this might be a little scarier, you can make the report anonymously to just ensure the wellbeing of the animal whilst keeping your privacy.

One last thing you can do is question where animals come from when you see videos or pictures of wildlife on social media out of their habitat and raise the flag to the rest of the viewers. Sometimes, let’s say when we see a cute baby wild animal in a bathtub or dressed up in a costume, or a living room, or a bed, we don’t question the scenario as much and just enjoy how cute the image is. Starting that conversation or even reporting the page is definitely the first step to spark a conversation and general awareness, and to create a safe place for animals online.

The illegal pet trade market and keeping illegal wildlife pets in Costa Rica, and around the world, is an issue that concerns all of us as environmentalists, and by initiating this change, we can make a difference.

About the author: Mariana Diaz, born and raised in Costa Rica, has been part of the Marketing Team at Toucan Rescue Ranch since late 2020. With a background in Media for Development and Social Change, Social Work, and Graphic Design, she supports communications and all things media!